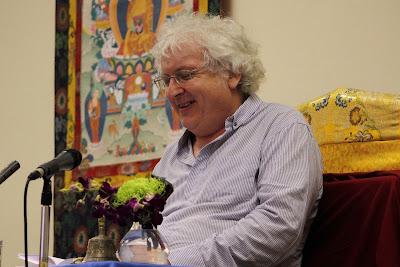 Lama Jampa Thaye recently visited Manchester on the weekend of the 5 to 6 of July where he taught the final section of ‘The Friendly Letter’ by Nagarjuna using the interlinear commentary composed by Karma Thinley Rinpoche.
Lama Jampa commented that the most important instructions of the three baskets are contained within this text. This was the first text that Karma Thinley Rinpoche taught when he made his second trip to England in 1977 and Lama Jampa emphasised the importance of this text as a fundamental dharma teaching.
On the Sunday afternoon, Lama Jampa bestowed the initiation of Chenrezik from the lineage of Atisha.
This concluded the first part of this cycle of Shedra teachings on the common foundations of dharma and this will be followed by Discriminating between Consciousness and Primordial Wisdom by Karmapa Ranjung Dorje which Lama Jampa will teach later this year on 30 November to 1 December.