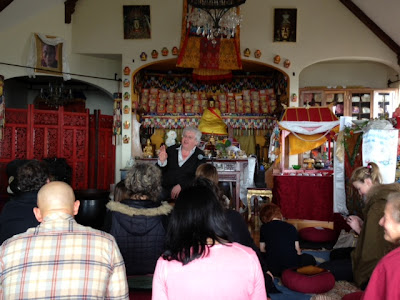 Lama Jampa recently spent two days at Ewam Choden in Berkeley, near San Francisco, at the invitation of Lama Kunga Rinpoche. Lama Jampa gave teachings on both the Rime approach to dharma and the philosophical systems of Rangtong and Zhentong Madhyamaka. The teachings were very well attended and there was much opportunity for questions. 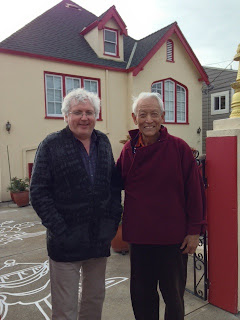 Lama Kunga Rinpoche, who founded Ewam Choden in the early 1970s was the younger brother of Thartse Khen Rinpoche. Lama Jampa received several key Lamdre teachings in the 1980s from Thartse Khen Rinpoche when he visited the UK.
Lama Jampa is currently completing his tour of North America with a week of teaching at Sakya Dolma Ling in Mexico City. His next teaching in the UK will be at Sakya Centre in Bristol on May 11. Click here for details.