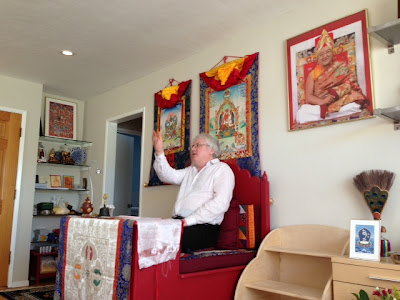 Lama Jampa has just completed his bi-annual teaching programme in West Los Angeles CA. During his visit he gave a series of teachings at Yeshe Nyingpo,  Kagyu Donak Choling and Sakya Samten Ling. On Saturday October 27 Lama Jampa taught a presentation of the Four Dharmas of Gampopa at Yeshe Nyingpo. At Kagyu Donak Choling on Wednesday October 31 he transmitted Chogyur Dechen Lingpa’s Liberation through Hearing in the Intermediate State. Both these events were very well attended and provided an opportunity for the wider Buddhist sangha in Los Angeles to hear Lama Jampa’s teachings.
Lama Jampa gave two days of teachings at the Dechen centre, Sakya Samten Ling. On Sunday October 28 he gave a detailed exposition of Instructions to the Emperor. This work was composed by the renowned Sakyapa master Chogyal Phakpa for his illustrious disciple, Kublai Khan. On Saturday November 3 Lama Jampa bestowed both the initiation of Vasudhara from the lineage of Bari Lotsawa and also gave Jamyang Kongtrul’s gomlung, a detailed explanation of Tangtong Gyalpo’s Chenrezik practice, The Benefit of Beings that Pervades Space.
Lama Jampa will return to California in March 2013. His next teaching event in the US will be at Tibet House in New York on Wednesday December 19 when he will give a presentation on the Madhyamaka (Middle Way view) philosophical systems of Rangtong and Zhentong. Click here for details.