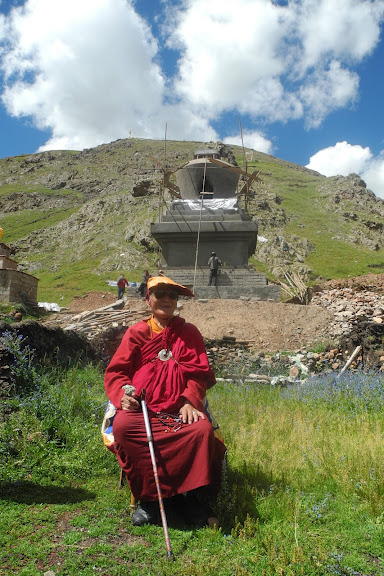 Venerable Karma Thinley Rinpoche arrived in his nunnery, Tegchen Legshey Ling in Nepal at the end of April, and after staying there for several weeks he once again undertook the long journey to his homeland, Nangchen in Kham, in eastern Tibet.
Fortunately, improvements in infrastructure within China meant that this year Rinpoche could avoid the usual 700-kilometer road journey from the city of Xiningto Jyekundo, and made the journey instead by air, finally covering the last 200 kilometres by road to Sharda, which is the capital of NangchenCounty. Rinpoche stayed at his temple, Tegchen Chokor Ling, which is located in Sharda. Rinpoche’s two and a half month stay in Tegchen Chokor Ling corresponded to the height of the Nangchen summer, which meant he could enjoy warm days and cool nights, with light snow falling only once on the local mountain tops. This year there had been particularly heavy rain in the spring, which meant the grasslands and mountains of Nangchen were especially green and full of flowers. Many of Rinpoche’s relatives and old family friends who came to visit him are still nomadic, and they brought fresh yoghurt, cheese, milk and butter as offerings. The yoghurt has a thick layer of yellow cream on top, and Rinpoche says when the yaks eat flowers all day the yoghurt is even more delicious!
Karma Thinley Rinpoche’s uncle, Namkai Dorje, who lived for many years at Tegchen Legshey Ling in Nepalbefore he passed away several years ago, was the head of the ancient noble clan called Bongsar. Two years ago Namkai Dorje’s daughter Tsodi visited Nangchen and instigated a plan to construct a large stupa at the site of the Bongsar palace, which was located in the vast high grasslands called Drongsho, much of which used to belong to the Bongsar estates until 1959. This year the plans came to fruition, with a large group of Bongsar clan members pooling resources and organising the construction of the magnificent stupa, which was completed at the end of August. Two senior members of the clan stayed at the site and supervised the project, and a group of monks from the famous Bamram Kagyu monastery called Chodrak Gompa, experts in stupa construction, lived at the site for 2 months during the construction. The monks prepared all the special prayers, mantras and other materials that were to be placed inside the stupa; these include the large central ‘tsog shing’ which is the wooden central spine, and the many ‘tsa tsa’, which are small moulded stupas made from earth mixed with precious materials. Many ‘yang’ (prosperity) objects are also placed inside, such as grains, precious stones, medicines, coins etc, with the purpose of increasing prosperity and harvests in the area.
Even though the road to Drongsho is quite long and arduous, Rinpoche managed to make the journey up to the high Bongsar grasslands to visit the site of the stupa under construction. He was received by his relatives there and requested to bless the stupa and all the materials to be placed inside. The location of the stupa is also Rinpoche’s own birth-place, so he was very happy to be able to arrive there and to see such a wonderful representation of the indestructible nature of Buddha-mind being built there. The weather was perfect so Rinpoche also got to see all the familiar mountains and valleys, rivers and plains of his youth in all their summer glory.
To complete the construction of the stupa, a statue of Sakyamuni Buddha was placed in the niche, which is surrounded by a beautiful copper decorative ‘pata’. The golden ‘choskor choksum’ – the 13 Dharma wheels representing the path to enlightenment, was placed on top and it was completed with a copper umbrella canopy, above which is a moon, sun and wish-fulfilling jewel.
By the time Rinpoche and Kunga were ready to leave Nangchen at the end of August, the weather was cooler and snow was appearing in the high ridges. All the summer flowers were fading, and only the beautiful deep blue autumn gentians were carpeting the high plateaus and passes. They are now safely returned to Tegchen Legshey Ling near the great stupa of Boudhanath, Nepal. 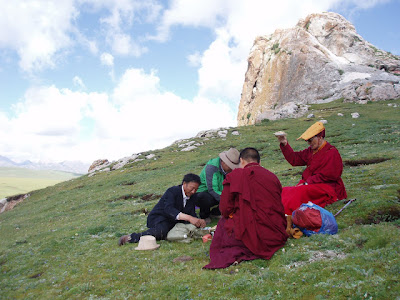 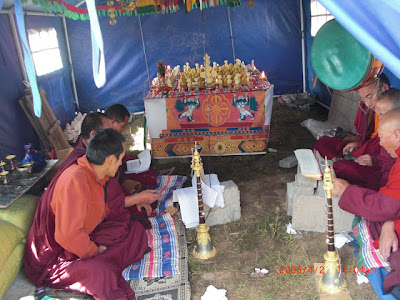 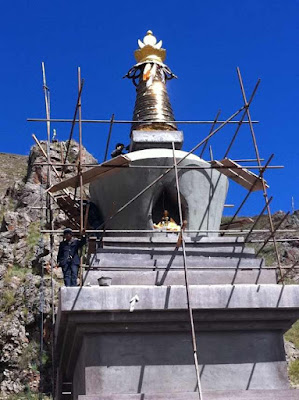