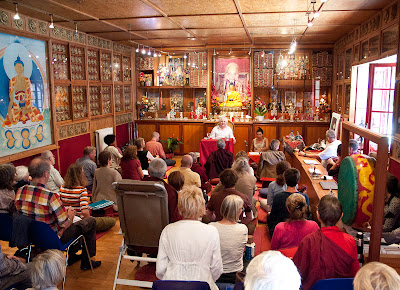 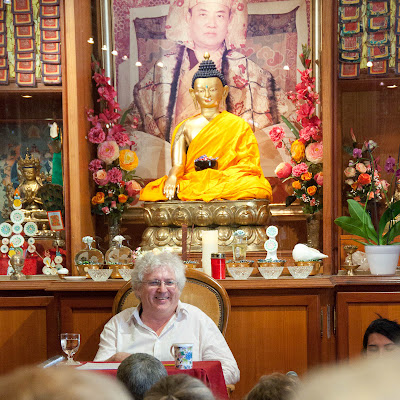 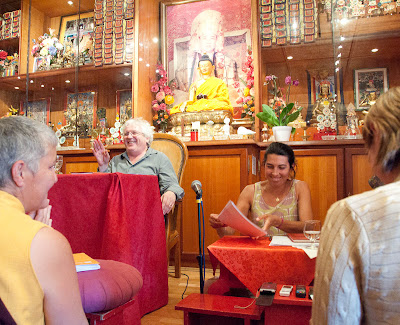 Lama Jampa Thaye has just completed a weekend of teaching on the Madhyamaka philosophical system at Dhakpo Kagyu Ling, the French seat of His Holiness Karmapa Thrinley Thaye Dorje. Around sixty five people, monks, nuns and lay people attended the teachings. Lama Jean Guy the president of the Dhakpo association gave a very warm introduction in which he referred to Lama Jampa Thaye’s role in protecting the Karma Kagyu tradition in England.

Lama Jampa has spent three weeks in France where he has been staying at Sakya Chang-lo-Chen Ling. During this time he has taught the first part of Sakya Pandita’s seminal work on Lam-Rim, Elucidating the Thought of the Sage and bestowed the initiation, tri and lung for White Tara Chintamanichakra one of the key longevity deities of the Sakya school. Following this Lama Jampa led a retreat on this deity.
At the start of his stay in France, Lama Jampa, attended teachings given by His Holiness Karmapa at Dhakpo Kagyu Ling. His Holiness’ programme which included several days of teaching from Shantideva’s text, The Way of the Bodhisattva culminated in the initiation of Chenrezik from the lineage of Atisha. Over 1,000 people attended the course. To view photo galleries of the events please click here.
Subsequently, Lama Jampa and Dechen Dolma travelled to Dhakpo Kundreul Ling, the main Karma Kagyu retreat centre in the Auvergne region. Here they spent time with His Holiness and received the initiation of Dorje Bernagchen.
His Holiness has now completed his European tour and will be returning to Delhi on Monday September 3rd.