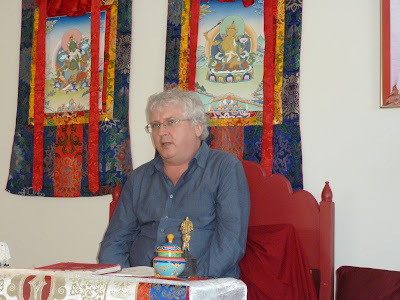 Lama Jampa Thaye visited Los Angeles to bestow a number of dharma teachings from 22 to 30 October. On 22 to 23 October, Lama Jampa bestowed teachings on the Madhyamaka View and the initiation of Manjushri at Sakya Samten Ling in Santa Monica.
On Wednesday, 26 October Lama Jampa’s teaching programme continued with ‘The Letter from the Heart’ by Patrul Rinpoche at Kagyu Do-Nga Choling. The event was very well attended by people from several dharma groups in West LA, who listened attentively and asked many questions arising from key points in the text.

A few days later on Saturday, 29 October at Yeshe Nyingpo Lama Jampa taught an extensive overview of the Three sets of Vows, explaining the importance of vows on the different stages of the path. The teaching culminated with the Fourteen Root Downfalls by Sakya Pandita. The shrine room was filled with students from Yeshe Nyingpo and Sakya Samten Ling, as well as with new students who had attended Lama Jampa’s previous teaching events that week. Many clarifying questions were made and several people stayed after the teaching to ask additional questions on practice in the Nyingma tradition,
Lama Jampa returned to London, England on Monday, 31 October and will bestow the Zhenpa Zhidral and the initiation of Orange Manjushri in London on 5 November.