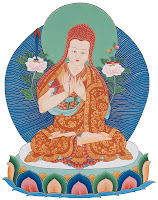 On Thursday 22 September Lama Jampa Thaye travelled to Sakya Namgyal Ling, Exeter where he gave a concise overview of the Buddhist path to members of the local sangha. The following day Lama Jampa gave interviews in Exeter before travelling to Bristol in the early evening.
On the morning of Saturday 24 September Lama Jampa taught the first part of the ‘Letter to the Noble Minded’. This brief text by Sakya Pandita clarifies the commitments involved in practising each of the three vehicles of Buddhism. It was written by Sakya Pandita in order to counter erroneous understandings of dharma practice that were extant at the time in Tibet. The teaching remains highly relevant today.
In the afternoon Lama Jampa bestowed the initiation of Simhamukha – one of the prized ‘Thirteen Golden Dharmas of Sakya’. Lama Jampa recounted how he had received these precious teachings from His Holiness Sakya Trizin 25 years earlier. He also mentioned that these were called ‘golden’ as their value was such that it was traditional for one to offer gold in order to receive them.
Lama Jampa Thaye’s next teaching will be in Stuttgart when he will bestow ‘The Fifty Verses on the Guru’ by Bhavideva, followed by the Initiation of White Sarasvati from the Bodong Lineage. Please click here for further information.