After a break of four years, Karma Thinley Rinpoche once again traveled back to his homeland of Nangchen, located in Kham, now part of Qinghai Province in China. This year it was possible for Rinpoche to be able to fly from the city of Zining to within three hours by road from Nangchen, which made the journey much more comfortable; when Rinpoche first returned to Nangchen in the 1980s, the same journey from Zining could take up to five days, depending on road conditions.
Rinpoche’s family members and old friends were very happy to be able to receive him again, and for two months Rinpoche based himself at his temple, called Tegchen Chokor Ling, located in Nangchen Town. Last year the area close to Nangchen was struck by a terrible earthquake, devastating the regional capitol city of Jyekundo, which is now in the process of being rebuilt; and this year there was another smaller earthquake in Nangchen itself which caused structural damage to many buildings but fortunately no loss of life – because most of the people in the remote nomadic areas had already moved out of their houses and into tents for the summer. There was no damage to Tegchen Chokor Ling, and Rinpoche initiated a repair program to maintain the condition of the buildings.
Rinpoche made two major excursions into the surrounding nomadic areas, one was to a beautiful valley called Sanjong, where many of Rinpoches relatives still live. Sanjong is also the location of Jamyang Lobchung School, which was instigated under Rinpoche’s direction in 1998 for the benefit of local children. The school now has more than 100 children and has a reputation as one of the best schools in the whole district. All the children live in the school because their homes are sometimes nearby, and sometimes, in the summer, much further away in the grassland pasture valleys high in the mountains.The whole school welcomed Rinpoche, and Rinpoche proceeded to bless the school buildings, teachers, kitchen staff and pupils.
The children are aged from 7 to 12, and they put on an extensive show of traditional dance and singing for Rinpoche. Rinpoche was able to stay three days in Sanjong, living in a tent amongst the summer flowers, and enjoying the delicious thick yoghurt presented by the local people.
The second excursion was up over a long winding pass to the high grasslands called Drongsho, to visit the site of his family’s former palace, which is also Rinpoche’s birthplace. Rinpoche knows the name and story behind every single mountain and valley there, and was able to visit both the monasteries of Lhachung and Lhachen, which were previously owned and administered by his family.
Rinpoche’s consolation for having to leave Nangchen as the summer came to an end was that he was going to be once again returning to the holy land of Nepal, birthplace of the Buddha, and location of his nunnery, Tegchen Legshey Ling, where he is currently residing. 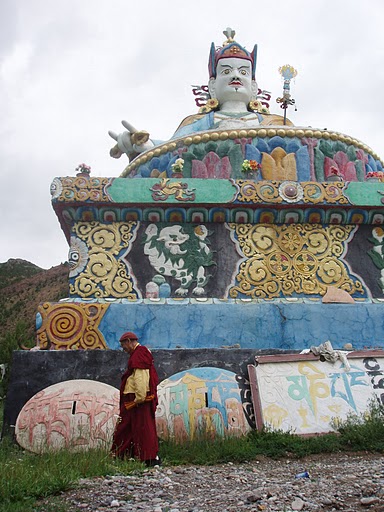