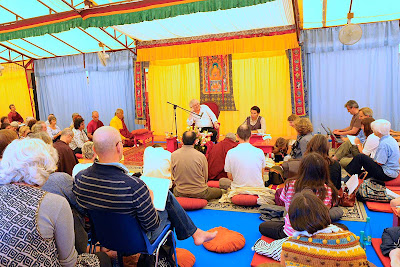 At the kind invitation of Jigme Rinpoche, brother of Shamar Rinpoche and representative of His Holiness Karmapa in Europe, Lama Jampa Thaye gave a teaching on the Madhyamaka philosphical system on the morning of 19 August at Dhagpo Kagyu Ling.

Under the gaze of a life-size statue of the 16th Karmapa, Rangjung Rigpe Dorje, Lama Jampa began with a clear and concise presentation of the four philosphical schools of Buddhist tenets and subsequently focused on the Rangtong and Shentong approaches to the Madhyamaka, skilfully delineating the key characteristics of, and the differences between, the two approaches. Lama Jampa concluded the teaching by discoursing on some of the notable responses to the Shentong approach, particularly those of Jetsun Rendawa and the Lord of scholars, Gorampa Sonam Senge. The event was attended by a great number of people, including members of both the Dhagpo and Dechen sanghas. 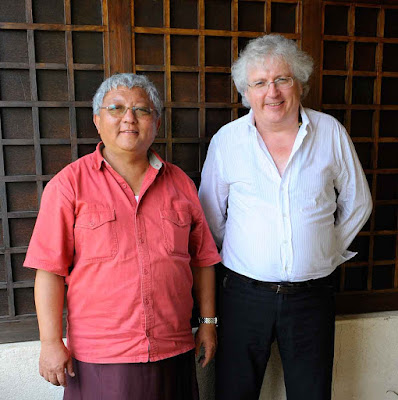 Following the teaching, Lama Jampa had lunch with Jigme Rinpoche and the president of Dhagpo Kagyu Ling, Jean Guy. During the lunch, discussions covered recent developments in the Karma Kagyu world, as well as plans for the future, including further visits by Lama Jampa to Dhagpo Kagyu Ling to teach again.

The auspicious event is a vivid illustration of Lama Jampa’s inheritance as a master of both the Karma Kagyu and Sakya traditions, and his ability to convey the profound meaning of the highest philosophical teachings of Buddhism to all audiences.