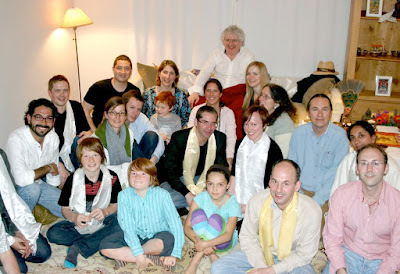 Lama Jampa Thaye has completed a significant ten-day visit to Los Angeles, California, during which he gave teachings to the local sanghas and established a new Sakya centre.

Over the weekend of 3 to 4 April, Lama Jampa gave the reading transmission and explanation of the quintessential dzok chen teaching, ‘Hitting the Essence in Three Words’, along with its celebrated commentary by Patrul Rinpoche, ‘Supreme Teaching on the Wise and Glorious King’, to the Yeshe Nyingpo sangha based in Santa Monica. This profound teaching explains the essence of ‘trek-cho’, or ‘direct cutting’, part of the ‘innermost essence’ teachings of the highest series of dzok chen instructions. Lama Jampa elaborated this with reference to personal instructions given to him by Dilgo Khyentse Rinpoche during the latter’s visit to England in 1976.

Subsequently over the next two evenings, Lama Jampa Thaye inaugurated Sakya Samten Ling, a new Sakya dharma centre in Santa Monica, LA, by teaching Sakya Pandita’s ‘Letter to the Noble Minded’ and bestowing the Initiation of Green Tara from the lineage of Sakyashribhadra. These teachings were received by a number of local students as well as several who had travelled to LA from Mexico and Great Britain. Sakya activities will continue to be hosted at the centre in friendly cooperation with the existing sanghas in the local area, with the programme centering around the weekly practice of Jamyang Khyentse Wangpo’s Green Tara sadhana.

Lama Jampa was also welcomed by the Santa Monica Kagyu Group, and taught the essential Kadampa text, ‘The Eight Verses of Mind Training’, along with its commentary by Chekawa Yeshe Dorje. With the new Sakya centre established, Lama Jampa will be visiting Los Angeles more frequently in the future.