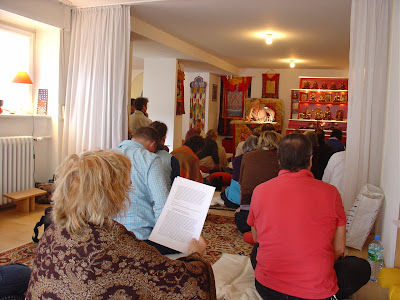 In the first of three visits to Stuttgart planned for 2010, Lama Jampa gave teachings at Sakya Dechen Ling on the weekend of the 6th and 7th of February. On the Saturday he taught the ‘Lojong’ text called ‘Mind Training in one Session’ written by Chim Namkha Drak, which is a very concise and easily understandable meditation and mind-training manual that can be applied immediately to daily life.

On Sunday Lama Jampa bestowed the initiation and the associated transmissions of Gönkar the ‘Great White Lord’ otherwise known as ‘White Mahakala’, who is a powerful protector of those practicing the Vajrayana, and is also efficacious in bringing about prosperity for the furtherance of the holy Dharma.

Both events were well attended, by regular sangha members as well as by visitors from within Stuttgart and further afield. Lama Jampa expressed his pleasure at being able to come to South Germany to teach, and also thanked everyone involved who continue to make it possible for him to do so. Lama Jampa will come to Stuttgart again in May and October.