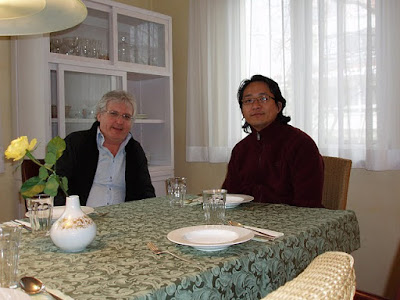 This was not the first visit to Sakya Dechen Ling from a member of the illustrious Khön family, throne holders of the glorious Sakya. H.H. Sakya Trizin’s sister, Her Eminence Sakya Jetsun Kushog Chime Luding Rinpoche, visited in 2008, and now, only a little more than one year later, Sakya Dechen Ling was fortunate to be able to host her nephew, H.E. Gyana Vajra Rinpoche.

Sakya Dechen Ling, Stuttgart, was established in 2005 by Lama Jampa Thaye at the request of Wolfgang and Hilde Staufner. The sangha meets regularly to practise meditation and recite prayers, as well as to receive dharma teachings and Vajrayana initiations from Lama Jampa and other visiting Buddhist masters. The shrine room in Sakya Dechen Ling was recently extended by the removal of a partition wall and the incorporation of an adjoining room, providing an increased space for the sangha.

At the request of Lama Jampa Thaye, H.E. Gyana Vajra Rinpoche bestowed the initiation of Sangye Menla, Medicine Buddha. Lama Jampa explained that the practice of Sangye Menla is an effective remedy for physical and mental diseases and also removes obstacles affecting Buddhist practitioners; therefore, it was an ideal teaching for His Eminence to bestow in order to benefit the sangha in Stuttgart and to further the growth of the Buddha Dharma in South Germany.

His Eminence expressed his happiness at being able to visit Sakya Dechen Ling and to see Lama Jampa again. His Eminence, accompanied by an attendant monk and Lama Gendun, stayed at the Staufner family home. The party were all amused by the light covering of snow in the area; the attendant monk could not recall having ever seen snow before. Before continuing with his European program, His Eminence enjoyed a visit to the Mercedes car museum in Stuttgart.

At the end of the teachings, Lama Jampa Thaye thanked His Eminence for coming to Stuttgart and expressed his happiness that His Eminence would be visiting Dechen centres in the UK in the new year.