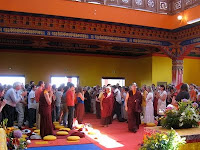 After his return from Bulgaria a few days earlier, on Monday and Tuesday 17 and 18 of August, Lama Jampa Thaye, accompanied by family and some students, was a guest of Kundrol Ling in the Auvergne region of central France. This monastery and retreat centre, established two decades ago by the great Kagyu yogin Gendun Rinpoche, is linked to Dhagpo Kagyu Ling, our neighbour in the Dordogne and the European seat of His Holiness Gyalwa Karmapa. There he had a private meeting with His Holiness Karmapa as well as informal discussions with Jigme Rinpoche, Trinlay Tulku and a number of other friends.

During these days His Holiness Karmapa bestowed the Choling Vajrasattva initiation. The day after this auspicious event Lama Jampa travelled on to Sakya Changlochen Ling, where the Sarasvati retreat begins on the 23 August.