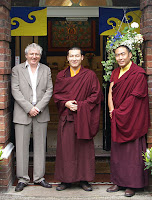 In the shrine room at Kagyu Ling, Lama Jampa offered a Mandal Tensum for His Holiness’s long life and, in a short speech, expressed joy at being able to host His Holiness’s first visit to the Dechen dharma community in his present, 17th, incarnation. Lama Jampa recalled the visit of H.H. 16th Karmapa, Ranjung Rigpé Dorje, in 1977 and the blessings which propelled the growth of Kagyu Ling. Lama Jampa further mentioned that it was due to the renewed blessings of H.H. 17th Karmapa that the recent Kagyu Ling project to acquire a new dharma centre had been so successful.

Following the welcome ceremony, His Holiness kindly blessed the Kagyu Ling shrine room and told the assembled sangha that he rejoiced in Lama Jampa’s dharma activity.

His Holiness is travelling with a number of Rinpoches and lamas; including, Nendo Rinpoche (pictured), Lama Tsultrim Namgyal, Lama Karma Wangdu and Lama Passang Waibu.