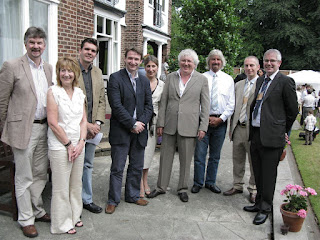 The move to new premises at Manor Drive was officially marked on Saturday with a formal opening ceremony held at Kagyu Ling. The event was well attended by local sangha, representatives from the other UK Dechen centres, the local MP and councillors, as well as neighbours and guests who had helped in the development of Kagyu Ling. John Sainsbury was the master of ceremonies in his new role as coordinator for Kagyu Ling and Jonathan Macaskill, Kagyu Ling’s other centre coordinator, gave a speech in which he outlined the various locations Kagyu Ling has resided in previously during its search for a more established home. Thanks were given to all who have supported Kagyu Ling during this process, in particular The Veolia Trust, who were represented by their chief executive Margaret Cobbold and Triodos Bank. Kagyu Ling was officially opened by Lama Jampa Thaye who explained the importance of a Dharma centre in housing the Three Jewels and enabling sangha to follow the Dharma path through the essential processes of hearing, reflection and meditation. To mark this auspicious occasion, Lama Jampa recited the prayer “The Twelve Deeds of the Buddha”, an English translation of which was provided for guests as a memento. Later all were able to enjoy tea and cakes in the garden and there was also an opportunity for guests to look around and see the fruits of all the work that has been carried out at Kagyu Ling over the last eighteen months.