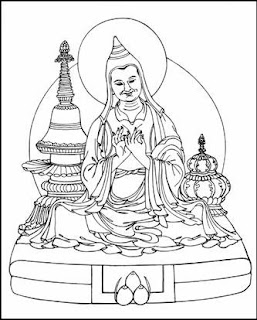 After bestowing Geshe Se Chilbupa’s commentary on Geshe Chekhawa’s famed lojong text ‘Seven Points of Mind Training’ at Sakya Thinley Rinchen Ling on 13 June, Lama Jampa Thaye kindly spoke to the Dechen Blog about the Masters from whom he has received Lojong teachings.

I have received many Kadam initiations, lungs and teachings intermittently over the years alongside the Sakya and Kagyu teachings in which I’m mainly educated. The first time I received Kadam teachings was spring 1977. Karma Thinley Rinpoche gave me the lungs for Atisa’s ‘Lamp of the Path of Enlightenment’, the principle text of the lam-rim (‘graduated path’) system, Atisa’s ‘Jewel Rosary of a Bodhisattva’ and Geshe Chekawa’s ‘Seven Points of Mind Training’. He also gave me the lung for ‘The Thirty-Seven Practices of a Buddha’s Child’ by the great 14th century Kadam/Sakya master Thokme Zangpo. I later (1982) received teachings on this text from Gyaltsab Rinpoche.

In 1979 Karma Thinley Rinpoche taught Geshe Langri Thangpa’s ‘Eight Verses of Mind Training’ during his visit to England. That same year I received the lung for Jamgon Kongtrul’s commentary on the ‘Seven Points of Mind Training’, entitled ‘The Direct Path to Enlightenment’ from Ato Rinpoche at his home in Cambridge.

In Toronto in 1986 Karma Thinley Rinpoche gave me the lung for the dam-ngak (instruction) section of Jamgon Kongtrul’s ‘Treasury of Spiritual Instruction’ (Dam-ngak Dzod) This contained the earlier collection known as ‘Lojong Gyatsa’ (The one hundred lojongs) as well as the commentaries on the ‘Seven Points of Mind Training’ composed by Thokme Zangpo, Jamyang Chentze Wangpo and Jamgon Kongtrul Lodro Thaye.

During this visit Rinpoche also gave me the lung for part of the Kadam Thorbu collection containing many instructions of Atisa and the early Kadam masters. It was on that occasion that Rinpoche told me that his wish was that the Kadam school should be revived and he urged me to found a Kadampa centre in England. He gave the name Kadam Drodon Khachab Ling to this proposed centre. Actually I was never able to fulfil Rinpoche’s wish but if I had maybe other things might not have happened.

Although I received all these Kadam sutra style teachings during these years, I only received a few Vajrayana initiations from the Kadam tradition in that period such as Atisa’s Green Tara from Ngor Phende Shabdrung Rinpoche and the initiation of Akshobya according to Atisa’s lineage from the late Gendun Rinpoche.

However in 1988 Karma Thinley Rinpoche gave the initiation for the set of famous Kadam deities (Shakyamuni, Chenrezi, Tara and Achala) at my request when we visited Germany. It was much later, in 1999, in Bristol that Rinpoche privately transmitted the accompanying tri-yig (‘written guide’) for the practices of the four deities that had been composed by Jamgon Kongtrul Lodro Thaye.

In 2003 I requested and sponsored the 35 initiations of the Narthang Gyatsa from H.H. Sakya Trizin in Sakya Centre in Rajpur. This famous collection of initiations and sadhanas was originally brought together by Chim Namkha Drak abbot of Narthang monastery in the thirteenth century. After passing from the Kadam to the Gelug tradition, it had been brought into the Sakya tradition at the time of the great Zhuchen Tsultrim Rinpoche.

In London in 2006 Karma Thinley Rinpoche gave me the lung for Jamgon Kongtrul’s commentary on Atisa’s ‘The Lamp of the Path of Enlightenment’ which he had transmitted to me some twenty nine years earlier in spring 1977.

Over the years Rinpoche has told me how he feels that the Kadam teachings are particularly appropriate and important for the West. It’s for this reason that I have often taught ‘The Thirty Seven Practices’, ‘The Eight Verses of Mind Training’ and ‘The Seven Points of Mind Training’.

H.H. Sakya Trizin received the Narthang Gyatsa initiations together with the rest of ‘The Collection of Sadhanas’ from Khangsar Khen Ngawang Lodro Tenzin Nyingpo.