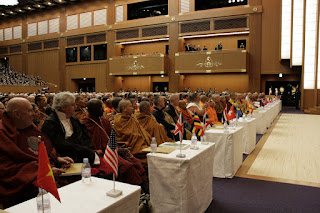 On October 30th Lama Jampa, accompanied by Dechen Dolma and a team of three people, flew to Japan to attend the fifth World Buddhist Summit.

The Summit was hosted with astonishing courtesy by the Nembutsu school, a recently established Pure Land organisation, in the Royal Grand Hall of Buddhism temple complex close to the city of Kobe. Buddhist teachers from thirty three countries and all traditions of dharma as well as numerous royals and politicians attended the Summit.

See a web album of photos.

The Summit itself was preceded by the inauguration of the Royal Grand Hall and a ground-breaking ceremony for the future Nalanda University which is planned for the site. Subsequently, the Summit conference ran for four days, commencing with a key-note speech from Ven. Dr. Kyuse Enshinjoh, founder of Nenbutsu-shu. Lama Jampa gave a speech on the three vehicles from the perspective of the Sakya school. The Summit concluded with a round table session and a Press Conference.